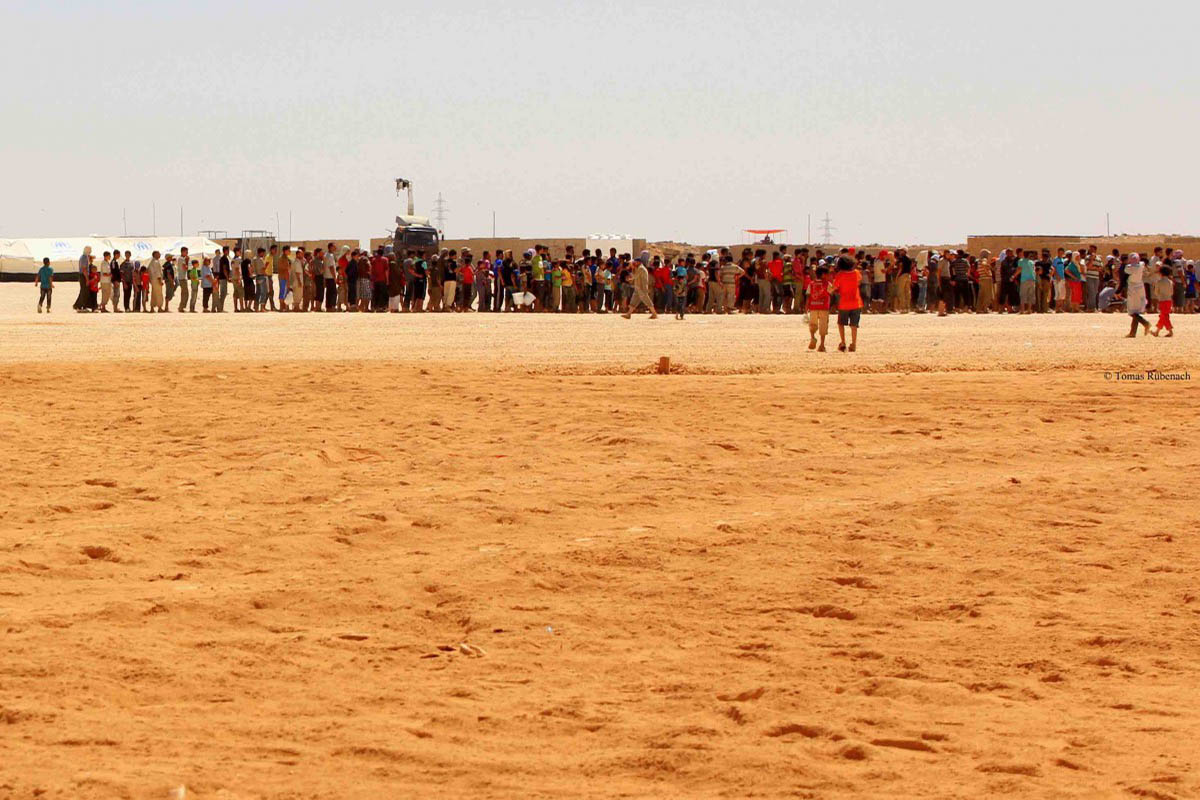 TSBN | 18 March 2016 The Syrian war is entering its sixth year. Millions of refugees, torn between hope and dispair. Hundreds of thousands of killed people, innocent mostly, victims of a barbaric fight. I have met Syrian refugees in the early stage of this war in the refugee cam Zaatari in Jordan, back in 2012. Read here about one of my many ecounters. The numbers have changed since, the reality stays.

The refugees’ future seems far away

Ahmad is smoking one cigarette after the other. He’s a real chain smoker. When we arrive in his tent, he’s smoking. His face is friendly, given the exertion of the escape from Syria. He welcomes us in an astonishingly kind way and is glad to give us answers to all our questions. His wife smiles at us and one of their sons asks us to enter the tent.

We are in Za’atari, Jordan, the camp for Syrian refugees, not far from the border of the war-torn country. We wanted to see first-hand what we’ve been reading in the international newspapers, on TV channels around the globe and the internet.

This camp was established in the last days of July. Back then, there were only between 2,500 and 3,000 refugees in Za’atari. Now, only six weeks later, it is almost 40,000. Not everything’s working perfectly, but given the funding – which is still not enough – the UN refugee organisation UNHCR has done a really good job in such a short time.

‘We would never call it home’

It looks as if we are on a huge construction site. Trucks driving around. Water tankers bringing in clean water for the refugees. From an unloading area, water bottles and foam mattresses are being distributed. The kids are joking and playing around among the tents and seem to be relaxed for these rare moments.

Ahmad and his wife are not relaxed. ‘Here it is more safe, especially for my wife and our children. But this is not a home,’ he says. He pauses between his sentences, not only for the interpreter, but also to weigh his words and thoughts. He breathes deeply when he pauses. He smokes. Then, after a short smile, he says, ‘I have nine children and my wife. One of the children is only three months old.’ A pause again, breathing. Then he expresses what seems to be most difficult for him. ‘At home I could take responsibility for all of them. I was working, I earned money to support my family. Now I can’t do anything.’ He adds that the food they receive will not be enough for all of them.

There’s not a single word of criticism against the UN. He emphasises how grateful his whole family is for the hospitality of the Jordanian people, that they opened their borders for the refugees coming from Syria. He praises the king of Jordan, again and again. Ahmad tries to stay neutral as well as fair when it comes to the situation he is forced to live in. But is this possible, having fled your own country where war and terror and violence are reigning?

Barcelona or Madrid – even here this is an important question

The wind is blowing constantly. This is bad in a desert-like area with so much sand. Very fine grains of sand cover the bottom of the tent. Outside they are collecting the garbage in a truck. What they don’t collect is used by the refugees. They take the paper and use it for a little fire to boil water for tea. There’s no wood here that they can use. They’ll share the tea with everyone in the neighbourhood, no matter who they are. Sharing is important here. While we are listening to Ahmad, his wife gives a sign to the children. While she’s breastfeeding her baby, she motions with one of her hands. Minutes later the kids come with something for us to drink, and some biscuits.

The conversation goes on and on and on. We talk about football, we laugh with the whole family. Then, all of a sudden, one sentence from Ahmad. Brutally honest. ‘If somewhere in this world a bird is threatened with extinction, the so-called international community mobilises everything, the best experts and the most expensive technical equipment, to save it. They do everything.’ Again, he is breathing deeply. He pauses. ‘But in Syria, in my homeland … people are dying like flies. And what happens?’

They invite us to come to Syria when peace returns. ‘We will show you our beautiful country,’ Ahmad says. He is smiling again. ‘And we will drink tea.’ His wife adds, ‘And we will eat something together as well.’ Allah may bless all of us, and our families, they say, while we are putting our shoes on again. And they say ‘shoukran’, which means thank you. ‘Shoukran, and may God bless you!’